Here are some testimonials from guests who have visited Our Secret Spot swingers club in Sydney. Check out the swingers club reviews below: 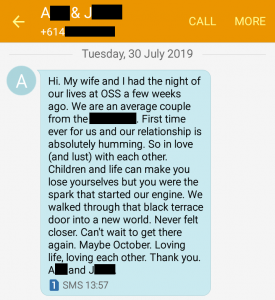 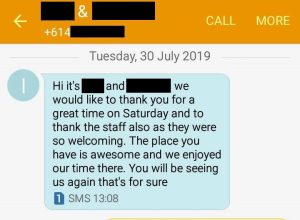 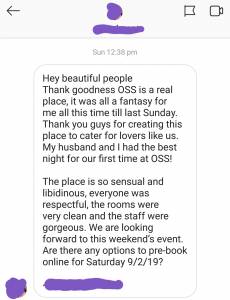 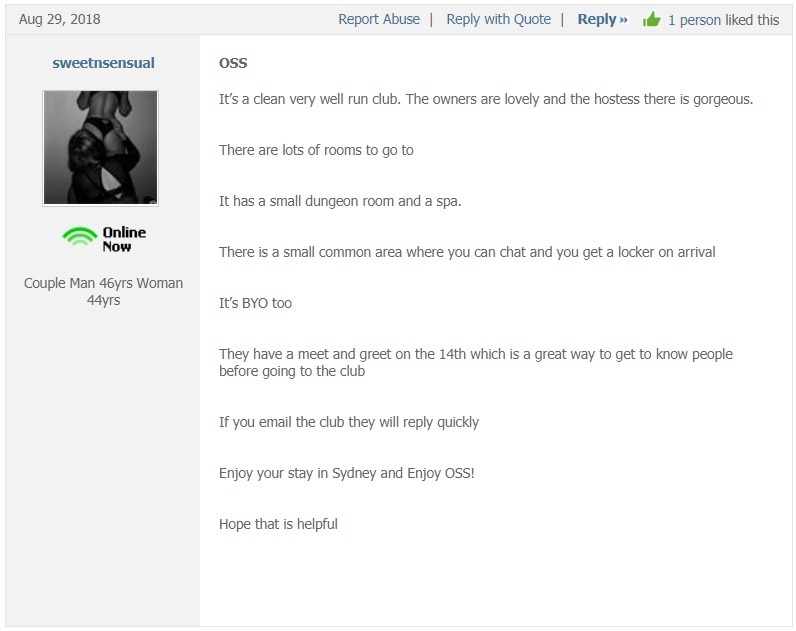 The monthly mingle was a great success as far as we are concerned. The meet in the bar was a real icebreaker and all the couples were really friendly and L was the perfect host. The atmosphere at the club was relaxed and the air was full of anticipation which soon transformed into a night of fun filled excitement. Can’t wait for the next one.

M and I were looking for an entry point into the scene and found OSS and had a FANTASTIC time. Mind blowing experience. Staff are wonderfully accommodating and open to answering any questions. It wasn’t an event just a regular Saturday night but I cannot wait to go to one 😉

Secret spot is a great venue and J and L are great hosts. We have been to several of their parties and always have fun even if we don’t play. Mrs Dex normally wears a sexy dress and nice lingerie and Mr nice jeans and shirt We started out with same room with another couple and being watched by another couple that was next to us was a really big turn on and when you feel comfortable having someone else touch you is pretty hot as well. Hope this helps

We’re early 30’s and attractive and we met really young couples there. A gorgeous Brazilian couple, hot American couple and some lovely young Aussies. On the second night we took a young couple back to our hotel! Awesome place and guaranteed to have a great time. We will go back for sure!

Just wanted to say thank you to you and your staff for making my debut into this world of NSA so thoroughly enjoyable.
It was just what i needed, and more than i expected.
Many thanks,
Miss E. – January 2015

We visited OSS last night for the first time and had a ball, ending up in a pile of bodies in the boudoir. We are looking to come back soon.
Mr M & Mrs B (Red Hot Pie) – January 2015

Headed to OSS to attend a party. We met up with a group of people we have previously had fun hanging out with and as is always the case we had a fun night!
The club is nice, it’s clean and well appointed. For the two of us who remember the Lotus Lounge this has a similar feeling about it. A mixture of rooms from larger play rooms to small cosy rooms to a “dungeon” room – more on that later.

At the party apart from the people we knew (sexy friends) there was a great mix of people of varying ages sizes and agenda’s. It was also nice that there were multiple couples but not hundreds. We only play with people we click with, or that stimulate one of our heads. So more than 6 couples but less than a million is great!

The place is super clean – I noted the managers cleaning sheets and making sure all was “in order”. God dam you could even see the bottom of the spa- and it didn’t have a rim of grime around it – YAY! The managers at OSS seem on hand at all times but stay subtly distant to let you do your thing.

Now I have been on here suggesting I am wary of going if there are smaller numbers and I still am, see above. But I like the idea of this club and I hope others do too. I hope others feel comfortable after hearing, that this is a great place to come along too, and in the future they do so as well.

Now on a personal note – as some of our “friends / fiends” may know I am sexually ambidextrous and like both vanilla and BDSM play ( I know who’d of thought, crazy right) So to the couple that asked me to flog and spank “her” while he watched on and then I instructed him to join me. Him getting a blow job as a spanked his delightful partner – then getting them to fuck as I continued to work with her – YUM guys 🙂 We also met a young couple very new to swinging and while they were nervous, they seemed to get their own groove by the end of the night. To the other three sexy ladies that took me aside and had their way with me – Sexy sexy sexy :-0

This is a great club well worth trying – bring some friends like we did this time, or meet people there that you have met on here (Crikey it’s stack safer and more reliable meeting at a club than a bar) and have a good time.

I took a friend there for the first time and she loved it. I wish when I was 22 someone had shared those experiences with me!

Just want to say a massive thank you to you and your girlfriend for Saturday night. It exceeded my expectations and I had so much fun.

Your venue is awesome, completely different to what I had imagined a swingers club would be like. It was very clean, very un-intimidating and very welcoming.

A massive thank you!

Congrats to the wonderful owners for creating something very classy and cool in the heart of Sydney. We wish you all the very best, it’s really lovely ! We’ll be sending people your way from Sunny QLD.

Loved OSS last night – crowd became smaller as night wore on but the action became hotter n hotter – in every corner of the club ( inc. the locker area!!!) We had an amazing time again – really wish some more people had said hello though as we were looking for more play friends but by then some groups had formed ( not a bad thing from what we say lol) Love to go there with more friends or meet at the club – it’s a real high end venue and deserves to be successful so hopefully more people will soon check it out. BTW we are members there now so hope to see and play with more regulars soon X

This was our first couples club experience and we weren’t quite sure what to expect. From the time of registering our interest to being greeted at the door by the hostesses, we felt welcomed and at ease. The owners and staff of the establishment were genuine and welcoming upon arrival and throughout the evening. The venue was classy & clean with rooms appropriate for the vibes of the night. The live entertainment from Arianna Starr got the evening rolling from my perspective (clothing seemed to peel off after her performance). The young gentleman with the candle/wax obviously enjoyed his job and put smiles on faces. The guests were all fun to be around and all added a certain sexy element to the evening.

The lounge and rooms were beautifully appointed. In fact, I was more than pleasantly surprised. I was expecting something, a little seedy and it was anything but that…Staff were very friendly and attractive.

Fun fun fun. Well I went with a friend and we had an awesome time! Granted it was busy as it was a Grand Opening but that was to be expected. The place was clean, sheets changed regularly, very friendly vibe! There was a sign on the wall to ask staff for help with any of the equipment which I did because I could get the swing right and meet up and had some fun with a coupe of couples. Will definitely be back next month. It all seems like a blur now.

There wasn’t a huge crowd, but I met some fabulous couples and had an awesome time chatting with everyone behind the scenes. There’s been a lot of thought put in to the space and it shows. It’s beautiful and a pleasure to be in. We were able to sit and have a drink and a chat with couples before moving on to the Spa. I’m someone who very much enjoys a little verbal foreplay, so having the lounge areas was fantastic.

Things moved to the Spa and got a little naughty 😉 It was the first time at an actual club for my playmate, he was a little nervous going in as he’d had an unpleasant party experience previously, but we had an amazing time with an amazing group of people. The whole evening just seemed to…ahem, flow, nicely. Staff were attentive with out butting in and were just a really cool bunch of people to be around as well. Lots of cheeky jokes/grins! X

We went last night and thought the venue was great. When you turn up you are greeted by a very attractive couple (which was a bonus…) who are really nice and were helpful throughout the night. We didn’t try the spa (although we saw couples in their most of the night) but had fun in a couple of the rooms. Would definitely recommend it especially as its only $100 at the moment, and we will certainly be going back.